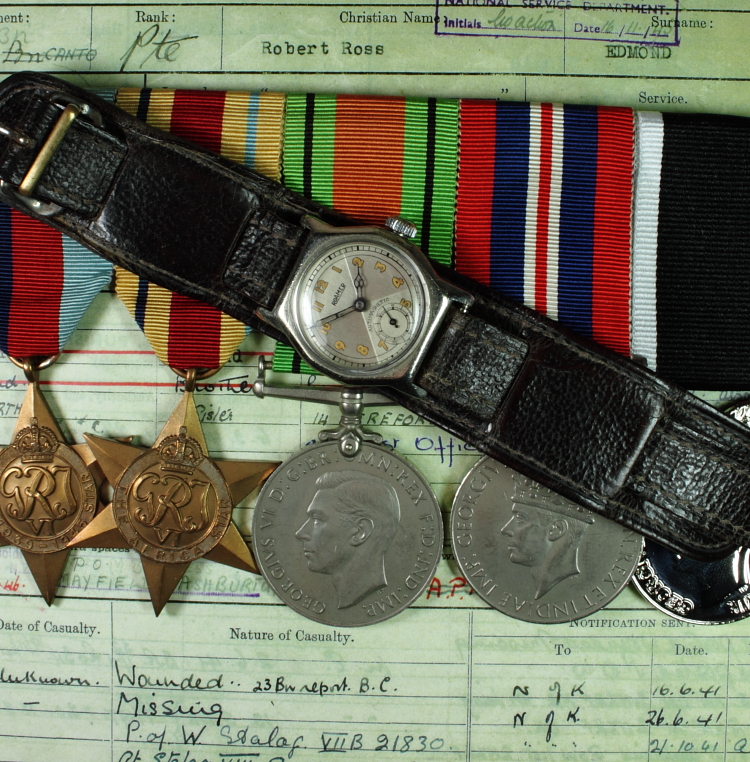 Sometimes with a watch we get to get a glimpse into the both the history of the watch and one or more of it’s owners.  Such is the case here when I purchased a Roamer powered by an MST 229. The sharper eyed will doubtless have spotted that it has a newly repainted dial. 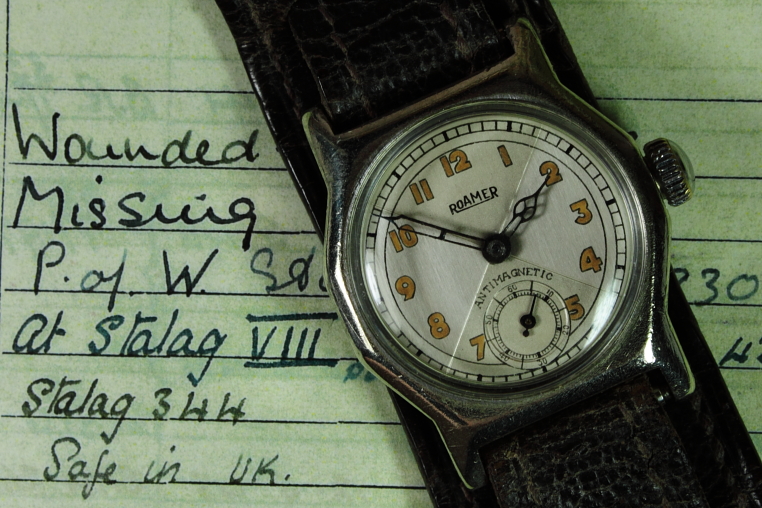 This is cased in a Taubert & Fils patented waterproof case. Heir to the Borgel cases so prized by collectors; the waterproofing an asset for a military man. Even for its time it was a small watch, but the evidence of Rolex sales in the Second World War indicates that the smaller watches were the most popular with the troops. 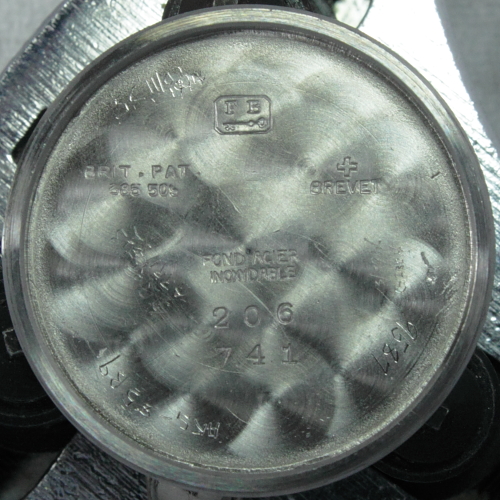 These cases were in widespread use by a number of watch companies, but perhaps the mostly commonly seen are those used by Mido and the West End Watch Co.  Roamer clearly were interested in producing watches in waterproof cases as in the early Forties they launched their own range based on the designs by Ernest Morf. These Taubert designs are the earliest waterproof cases I’ve seen Roamer use. You might notice that the case is unpolished and this is unusual though I do have an Indian watch with the same finish, so it isn’t unique to Roamer.

This watch is also interesting as it must be an early use of the then new Roamer logo. When I first saw the watch I suspected that the wrong logo had been applied by the redialler but it is also engraved on the movement. 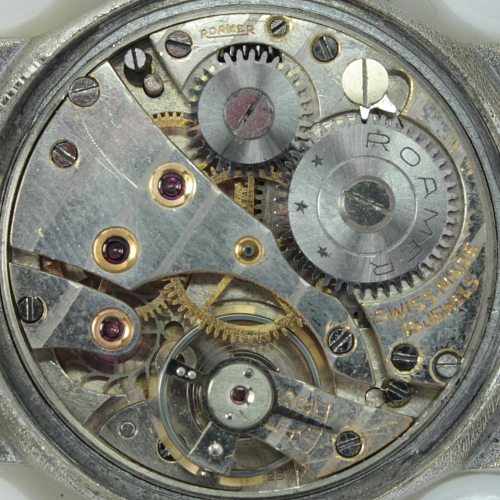 The caseback carries an inscription, which is faint and a little hard to read but works out to R.R. Edmund, 11521, N.Z.E.F. 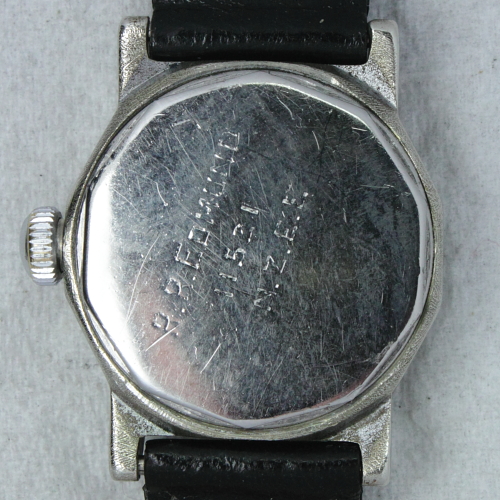 A little detective work has helped reveal some of the history of the watch and its owner and for that I’m endebted to the NZDF Archive and Trevor Edmond, whose grand uncle owned this watch. Research shows that the engraving should actually read Edmond not Edmund, but I’m not entirely sure if this mistake was down to the engraver or the owner.   Robert Ross Edmond enlisted with the New Zealand Expeditionary Force (NZEF) in 1940, but before we consider that, what of the man himself?

Robert was born in 1901 on New Zealands South Island to William Edmond and Frances Paton.  His father worked as a dredgeman, digging gold silt from the river beds where the Clutha river meets the Manuherikia River in the goldrush town of Alexandra, Otago, NZ. For a short while after that his father worked as a labourer and then as a gardener in Dunedin.

Robert, or Ross, as he liked to be known, a man of a quiet and solitary nature, was the youngest of three children in this hardworking family.

Leaving his immediate family behind, Ross moved to the small farming community in Mayfield, near Ashburton where he worked as a labourer. When he enlisted in the Army for the Second World War in January 1940 Ross would have been aged 38 (or 34 according to his army records – a common fiction to avoid the maximum age limits), so an older man to be going off on active service. He claimed to be unemployed when he joined and whether like his age this was a minor fiction, it is certainly true that he was one of the first to do so.

He joined the 23rd Canterbury & Ontago Bn (later to be known as 23 Canto or the 23rd Rifle Bn), part of the 5th NZ Infantry Brigade, 2nd Echelon NZEF.   There is a detailed history of the 23rd here, but in the most summary of overviews, they trained enthusiastically in NZ before shipping over to England where they were part of the Battle of Britain defence against the threat of invasion.  After this they fought in Greece, Crete then North Africa and Italy. It is said that the 23rd was one of the most active and successful units from NZ, though they also had one of the highest casualty rates.

Crete was a little known field of action so I will give an outline as it is relevant. The NZ forces shipped there from Greece, having fought a rearguard action there against the invading German forces. Soon after they arrived in Crete there was a large airborne attack by German troops, most of whom were paratroops and mountain forces, normally reckoned as elite units. The fighting was intense and much of it at close quarters. Eventually the Allied forces were driven off and evacuated the island. Casualties on both sides were high, high enough that the Germans never again attempted this sort of paratroop attack.

The Evening Post reports Robert as wounded in the 18th June 1941 edition, some two weeks after the official records record it, and even this was after the evacuation.

On the 30th June the Auckland Star now reports him as missing. As sometimes happens when fighting is intense and fast moving it isn’t always possible to evacuate all of the wounded and it seems that Ross was left behind in the retreat from the island. This was confirmed when The Auckland Star in the 23rd October 1941 edition reported him as a prisoner of war.

The 23rd had come to Crete with reduced numbers but they left behind 114 prisoners of war of whom 58 had been wounded. Ross is recorded as being held at Stalag VIIIB at Lamsdorf, Poland in August 1943 and this seems reasonable since this was where the later to arrive NZ soldiers captured on Crete were taken including medical officers and convalescents.

His family had to wait for four years for good news, but finally in the Evening Post on the 19th May 1945 Robert is listed as now being in the UK having been a prisoner of war. Now, his sister is listed as the contact; Mrs R McCarthy of 14 Hereford Street, Timaru.

What wasn’t mentioned at this time were the long and forced marches as the Russian forces advanced. It says something for the German Forces that they did this to ensure that the prisoners could be returned to their own forces and not captured by the Russians who did not have a good reputation in this regard. However, good policy though it might have been, it was brutal in its execution and the results were very hard on the prisoners and many died. Ross related that it was the American forces that eventually liberated them, and that the American soldiers took care to discover who might have mistreated them.

More about the Long March can be read here.

After the war Robert returned to Mayfield working again as a labourer, retiring by 1963.  He died in 1972, being buried in nearby Ashburton, which is the main town for the Mayfield area.

So what of the watch?  Well, we don’t know when it was bought.  Certainly it would have been an expensive thing for a labourer to have bought – most men in his position would have been tempted by the cheaper pin levers.  Did he invest his savings and buy it in NZ or did he buy it somewhere along the way?   According to Kris in his blog on military roamers; “Roamer watches were available to Allied military personal in the PX.” It seems likely to me that this is what he did, perhaps when he was in England from the NAAFI in the barracks where he was based.

Did it remain with him in his time as a POW? Contrary to the looting displayed by other forces (including it must be said the Allies) it seems that at the time of the Crete invasion the German officers took a dim view of prisoners being robbed (though there are of course tales of it, but also of German soldiers buying things from the prisoners such as watches for good value). These soldiers were as said before some of the Germans more elite units and thus likely well disciplined. In the camps themselves it was possible to buy Rolexes direct from Switzerland so it seems that things were relatively well ordered there, and so it seems to me perfectly possible that the watch remained safe with Ross the whole time.

I bought the watch from a dealer in New York, so there are still mysteries to be solved for this watch which seems to have travelled around the world at least the once, and has now travelled back to Switzerland with me, even if not back to the place it was built. 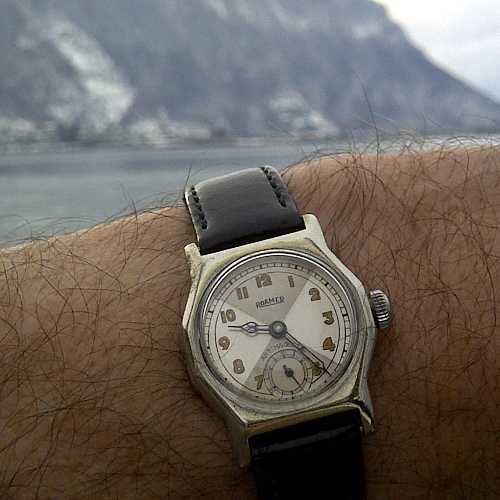